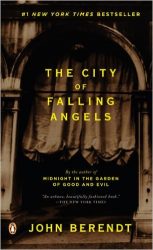 In Truman Capote’s In Cold Blood, the reader has a strong feeling of time. The story covers years and you can clearly feel Capote’s desire to tell the story to the end, but at the same time strongly fearing and wishing for a conclusion. In Berendt’s books, time is immaterial. As in Midnight in the Garden of Good and Evil , the story spans years. Yet the reader is given the feeling that Berendt is constantly assailed with exciting events and wonderfully weird people. While he does see the story through to the end, the trip is as important as the destination.

City of Falling Angels covers the arson of the 200 year old Venetian Opera House, the Fenice. Once a world super-power, later a crumbling backwater, Venice is now to many only thought as a prime tourist spot. Unlike other tourist destinations, Venice is very much a living, working city full of fascinating locals. Berendt picks up the story of the fire a few days after the event, as he coincidently arrived for a vacation. Interviewing natives – from local grocers to the ultra-wealthy palace owners -he covers not just the story of the Fenice, but the story of Venice and its inhabitants. The Venetian mindset is truly unique. While at once considering themselves a step-above, as though their art and architecture add a certain cache to everyone on the island (“Europe would still be an island if they hadn’t built a bridge from Venice”) Venetians will also freely admit that their beloved city has gone through some disastrous times. While Napoleon sacked and looted a great deal of city, leaving it to rot, ironically much of the grime and long-disinterest has helped to preserve the building and art that was left.

Berendt wanders from rich British expats, the Guggenheim, internal wars in philanthropic groups attempting to save Venice, Ezra Pound’s mistress, a world-famous rat-catcher, an infamous gay poet and, of course, the trial itself. Brilliant, rich , fascinating and every bit as good as Midnight.