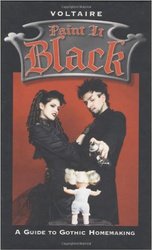 The Glue Gun: If you have never used a glue gun before, then I am honored to introduce to you a tool that is going to make you Gother than you could ever imagine. Why, you ask? Well, I have been using glue guns for nearly twenty years now and I have never met a glue-gun user (including myself) who hasn’t at some point squirted a heaping dollop of blazing, molten glue into the palm of his or her hand. And let me tell you that as Goth as you think you are, you have never known the unfathomable depths of excruciating anguish and despair than will be revealed when you’ve done this… Suffice to say, nothing else you’ve experienced in your wretched life will be as shite-poem inspiring as this hellish experience.

Want to be Gother than thou on a minimal budget? Voltaire has it all – gothing out your home with paint, fabric, electrical tape and a glue gun. As with his fantastic music (Ex-Lover’s Lover, When You’re Evil), comic books (O My Goth!) and other books (What is Goth – featuring the gothic poem generator) the book is dark dark, darkity-dark while also being ridiculously, totally over the top silly and fun. Not planning to paint it black? Read it anyway, just for Voltaire’s commentary.