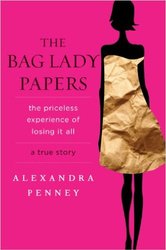 Reviewers of Penney’s book panned it , calling her “entitled”, “rich” and “whiny”. Clearly, none of them bothered to read more than the dust jacket…if that. Penney lost her life savings which she had scrimped and pinched through years of hard, exhausting work. She talks about the sickening shock of going from something to nothing in a moment.

Last Thursday at around 5 p.m., I had just checked on a rising cheese soufflé in my oven when my best friend called.

“Heard Madoff’s been arrested,” she said. “I hope it’s a rumor. Doesn’t he handle most of your money?”

Indeed, he did. More than a decade ago, when I was in my late 40s, I handed over my life savings to Madoff’s firm. It was money I’d been tucking away since I was 16 years old, when I began working summers in Lord & Taylor, earning about $65 a week. Not a penny was inherited. Not one cent was from my divorce. I earned all of it myself, through a long string of jobs that included working as a cashier at Rosedale fish market in New York City in my 20s, and later, writing bestselling sex books.

Penney talks about her life-long fears of being a bag-lady, being a single mother, working well-paid but insanely stressful jobs and her attempts at being an artist. A candid and unnerving account of something that could happen to anyone.