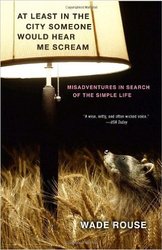 Davis’s first chapter “Coonskin Cap” ties with http://hyperboleandahalf.blogspot.com/2010/11/dogs-dont-understand-basic-concepts.html for funniest thing I’ve read in the last year. A flamingly fabulously gay man who escaped his home in the Ozarks to recreate himself as an anonymous city-dweller, Davis decides at 40 that he is doing it all wrong. After a number of not-particularly subtle signs, he and his boyfriend buy a cabin in Michigan. Davis wants to invent his own “Wade’s Walden”. The couple have no idea how tough life is in the dead of winter, deep in the woods. Davis makes a valiant attempt to assimilate, tries to loose his snarkiness and cynicism and to embrace nature. Sometimes it works, other times, eh, not so much. Honest and wildly funny.

The raccoon digs its claws into the side of my head and beings to burrow, like it’s trying to bury the apple core it still has in its mouth in the middle of my brain.

Which is another reason why I shouldn’t be living in the woods. I care more about how my profile will look when I’m found dead than about actually staying alive.