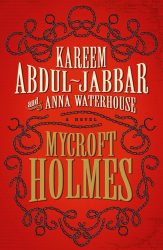 Mycroft Holmes had three major strikes against it – 1. written by a celebrity 2. co-written with a  professional writer and 3. a story in a major and wildly popular canon. However, after reading an excellent op-ed written by Abdul-Jabbar in the Washington Post, I decided to give it a whirl. What a fun read!

Abdul-Jabbar, a life-long Holmes fan, came up with a exciting adventure focusing on Holmes’s older, and mysterious, brother Mycroft. That Mycroft rarely makes an appearance in Conan Doyle’s books gives the authors a great deal of latitude to breathe their own life into him.

Fans of Michael Crichton and Douglas Preston/Lincoln Child will love the premise. Cyrus and Mycroft must find out what ghastly creature is sucking the life out of children on Cyrus’s home island of Trinidad. The two become embroiled in intrigue and adventure (of course). Like the best thrillers, there is plenty of true, historical detail to flesh out the story. Cyrus gives us a window into life as a free, educated black man trying to make a living in Victorian England. The trip across the Atlantic describes the misery of ocean voyages for people of every class. Mycroft and Cyrus even meet with the Merikins, a group of former Marine slaves who fought against the US for the British. There is, of course, also plenty of biff-pow action to be had.

A fun, thrilling, fast-paced adventure. I look forward to the sequel!