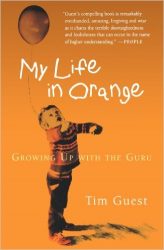 My Life in Orange (Tim Guest) and Bhagwan, the God that Failed (Hugh Milne)

Both of these fascinating autobiographies tell of the authors’ lives living in ashrams of the Guru Shree Bhagwan. Guest moved into his first communal ashram at about age 5 when, after short bouts with other major movements, his mother hears a tape of Bhagwan speaking. For the next 6 years the two move around the world at the behest of the guru. Guest tells of the freedom of life in a commune but also the loneliness and instability, particularly when his mother leaves to teach for weeks at a time. In addition to continual moves from ashrams in various countries, Guest also bounces from the total communal life to a few solitary weeks a year with his father in California. 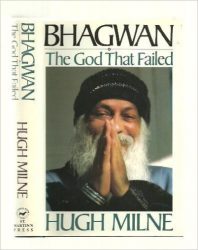 Though both Milne and Guest’s book deal with interpersonal relationships and power struggles in the ashram, Guest writes his event as they unfold to the eyes of a bewildered child. Milne became a follower of Bhagwan in his early twenties. While he has a different focus – joining as a devoted follower – much of the commentary is very similar. They both talk about the early, almost idyllic days in Poona India. Then, as the number of followers grows, the mellow, happy and very pro-sex guru and his inner circle start taking the group into a very different direction. The end of both comes near the final days of The Big Muddy, a massive city in the works built in Oregon from the millions donated to Bhagwan. Both leave the group before the final tense collapse but do keep tabs on the major players as they flee the country pursued by law enforcement of all stripes. Both books give a very interesting clear-eyed look inside a major cult. They answer a lot of the “what the hell were you thinking?” questions that inevitably come to mind. Remember, Jesus saves, Bhagwan spends.