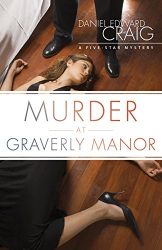 By far the best mystery I’ve read in months, Murder at Gravely Manor is creepy and gripping. Former hotel manager Trevor Lambert decides that his life-long ambition is to own a B&B, despite never having mentioned this ambition previously. When he finds that he eccentric Lady Gravely is going to sell her historic B&B, perhaps at a steal, he enters into a bizarre month of training. Lady Graverly careens from one personality pole to the other. At times she dotes on Lambert – at other times threatens and berates him. The rest of the staff leave, one after the other, leaving Lambert alone with a women he is increasingly sure committed a murder 40 years previously. Gothic, dark and wonderful.