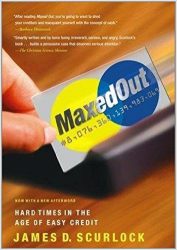 Wowza, talk about a 21st century Cassandra! Written as a companion to his movie, Maxed Out, Scurlock includes the stories and data too complex for the big screen. Published in 2007 the book was written in ’05 and ’06. Scurlock saw the storm clouds of predatory lending, easy credit and bankruptcy gathering. His interviews are often sickening. People with mental retardation being coerced into signing up for credit cards, then losing their city-provided housing; out-of-control spending hidden from the families and ending with suicide; collection agencies and their tactics. It is all here. Scurlock interviews those being beaten down by heir debt and those trying to stop the tactics of the credit card and loan companies. His book makes everyone but a few huge banks powerless nobodies. Scary and awful.