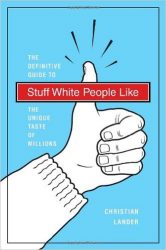 Oh. My. God. I am so white. I mean, this shouldn’t be a surprise, seeing as you can see my veins in face during winter, but damn. We had the great pleasure of seeing Lander talk at the WI Book Festival a few weeks ago. He seemed awed and overwhelmed by his journey. His blog http://stuffwhitepeoplelike.com started in January as a joke. Yes, Jan ’08. By Feb. he had a book deal and by July he was NY Times bestseller. And why? His lethally accurate snark.

What do white people like? We like brunch, dogs, wearing scarves, chunky glasses, ethnic food and riding bicycles. We also like knowing what is best for poor people, changing our religions, living abroad, threatening to move to Canada and trying to shame people who are inside on nice days. We like Barack Obama b/c if we didn’t people would think we were racist. With laser-like accuracy Lander pounces on so many of the most cherished beliefs middle-class liberal, educated white people* have. Mostly hilarious, but with plenty of uneasy undertones. Yes, we are hypocrites but I link to think that we are at least guilt-fueled, well-meaning hypocrites.

On a side note, as he signed my book I asked Lander how my Dad could be so “white” (based on his categories) and still be so Republican he defends Nixon. Lander looked perplexed then finally said “He’s being ironic.” Ahhhhhh, now I see.