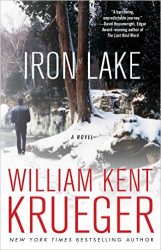 The owner of Booked for Murder in Madison sold me on this title and an excellent call on her part. But then again, she owns a murder mystery store and lets her dog room free in it, so hey. Apparently part of a series, this Cork O’Connor book was completely satisfying without knowing any back story. O’Connor, a former small-town sheriff, becomes involved in murders related to the local reservation casino in northern Minnesota. Part Irish and part Anishinaabe, O’Connor is sometimes welcome and sometimes reviled from both the native and white communities. Not officially on the case, but involved non-the-less, O’Connor investigate a series of murders, the disappearance of a local boy and a native legend – all while trying to hold his disintegrating family together. Well written, fascinating and oddly familiar, this is an excellent read for fans of any genre.