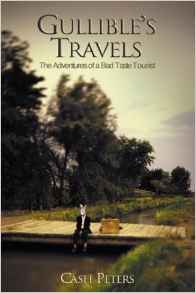 Peters’ travelogue is by far the oddest I have ever read. Peters is best known for doing short segments on wacky roadside attractions for public radio shows like The Savvy Traveler. Within a few pages, Peters makes clear how much he loathes this lifestyle. Fourteen years of being sent to crazy places on a shoestring budget has made Cash a bitter boy. Days in rented cars with Chamber of Commerce guides named Lisa and nights in seedy motels with wretched restaurants took their toll. Instead of the peppy travelogue I had expected, Peters covers the last 6 months of his career in out-there travel reporting, documenting the hilarious, painful and speedy descent of his travel reporter career.

While he does cover some places that sound fun to visit, namely the Museum of Bad Art (reviewed last month) other trips fast dispel the notion that being a travel writer is great fun. Nasty B&B owners, horrible contraptions he feels forced to coo over at a tradeshow, scuffles with people in mascot costumes, being forced to do the Sound of Music tour 5 times (a tour viewing the backs of buildings where bits of the Sound of Music was filmed while trapped in a bus full of people singing Edelweiss) culminating in his last, horrid review of Graceland, where he was marched from the premises. Sarcastic, accurate funny and weird, a good read for anyone considering a career in the travel industry.