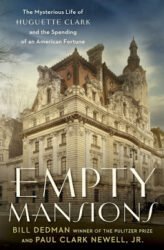 Author Bill Dedman stumbled onto the story of the lifetime while realty surfing out of his price range. WAY out of his price range. When a fantastically expensive mansion, empty for decades though well-maintained, caught his eye, he became intrigued. Dedman soon found other properties like this, scattered around the United States. His interest turned into a multi-year project, series of article and a book on a mysterious and fabulously rich recluse, Huegette Clark.

Huegette was the daughter of W.A. Clark, one of the Gilded Age’s richest men. Always shy, she preferred her own company and those of a few family members. Though a talented painter, she had little interest in showing her work. As her precious family and caretakers died, Huegette’s world became smaller and smaller. In her late 70s, medical emergency landed her in an exclusive hospital – which she then refused to leave for decades.

Yet, her life wasn’t unhappy, nor did she appear to be mentally ill. A great philanthropist, warm and sweet, she wildly knowledgeable about art and Japanese culture (a country she had never visited). She simply chose to live life to her own rules. And with millions to spend, could do anything she desired any way she desired.

Despite many of her relatives being unaware she was still in fact alive, once her existence became public, trouble soon followed. The last years of her life, and many following her death at 104 became a tug of war over her money. From the hospital administrators, her personal nurse, relatives she had never met, attorneys and accountants, and a few close friends, her money affected and tainted all her relationships.

This wonderful book shows life for the 1% of the 1% at the turn of the century – a life filled with wealth, power, and every material possession you could desire. But it also shows the sad reality of how this money can color all affection and influence friendship.