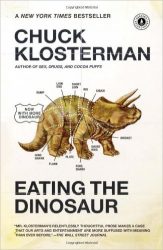 What I think I love about Chuck Klosterman most is his ability to make anything (and I mean anything) he writes about interesting. I may not understand a sport, have heard a band or have seen a tv show but he still explains their relevance (as he sees it) to modern culture. His scrutiny of the mundane make the mundane fascinating and important. So much we take for granted – be it Weezer’s lyrics or Pepsi’s advertising – are both interesting in their own right and in some ways do have impact on our lives.

In one essay, Klosterman uses the example of the band Weezer’s lyrics to highlight the ingrained irony in American thought. Fans of the band are confused by the totally unironic lyrics; Americans assume that everyone is being a little ironic or lying to some degree. No one is unabashedly enthusiastic about anything. If we are, everyone assumes you are being ironic or sarcastic.

I fear that most contemporary people are answering questions not because they’re flattered by the attention; they’re answering questions because they feel as though they deserve to be asked. About everything. Their opinions are special, so they are entitled to public forum. Their voice is supposed to be heard, lest. . . their life become empty. This… explains the rise of New Media.