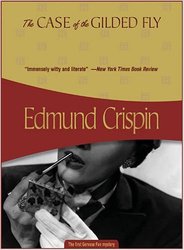 Crispin is one of those golden-era British mystery authors that is too little known today. His Oxford don, Gervase Fen, is funny, snarky, whitty, absent-minded and brilliant. Whirling from one unlikely event to another, finding clues (and only clues) in the oddest places, Fen and associates solve crimes with style and posh, educated brilliance.  Bloody brilliant, old thing!

Sheila McGraw, the young woman who produced the plays at the repertory theatre in Oxford, traveled third-class. She did this because she thought  that art must return to the people before it could again become vital, and she occupied herself with showing a volume of Gordon Craig designs to a farmer  who was sitting next to her. She was a tall young woman, with trousers, sharp-cut features, a prominent nose, and straight flaxen hair cut into a bell. The farmer seemed uninterested in the techniques of contemporary stage-craft; an account  of the disadvantages of a revolving stage failed to move him;  he showed no emotion, except perhaps for a momentary disgust, on being told that in the Soviet Union actors were called People’s Merited Artists and paid large sums of money by Josef Stalin. At the advent of Stanislavsky, seeing no opportunity of flight,  he came off the defensive and attempted an outflanking movement. He described the methods used in farming; he waxed enthusiastic over silage, the bulling of cows, bunt, smut, and other seed-borne diseases; he deplored, with a  wealth of detail, the activities of the Ministry of Agriculture. This harangue lasted until the train finally go into Oxford, when he bade Sheila a warm farewell and went away feeling slightly surprised at his eloquence.  Sheila, who had been somewhat taken aback at this outburst, eventually managed to persuade herself by a form of autohypnosis that it had all even very interesting.  However it seemed likely, she reflected with regret, that a farming life bore little actual resemblance to Eugene O’Neill’s Desire Under the Elms.