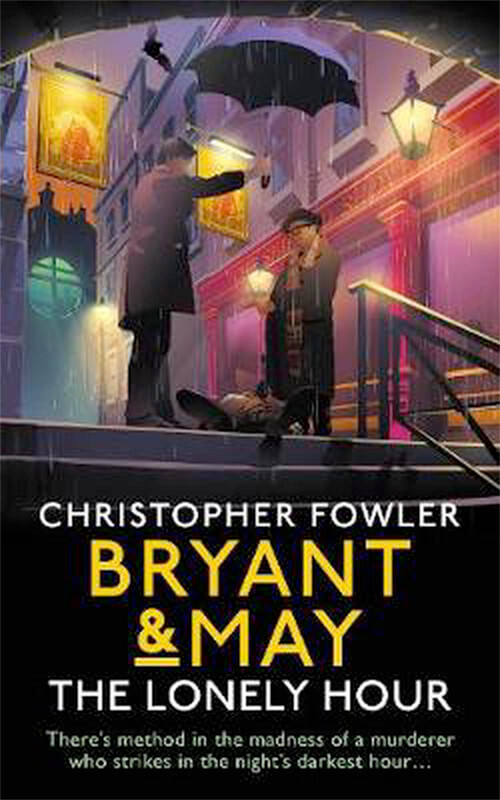 By far the best in the series for awhile, The Lonely Hour has Bryant and May at their finest, weirdest, best. Spoiler alert: The memory issues from past books have totally solved/explained and these two octogenarian detectives have their snappy synapses firing at full. There’s plenty of the funny back-and-forth that seemed lacking in past books:

Your sense of humor is an acquired taste.
Bryant was indignant. ‘I know regular jokes. I heard one quite recently, as a matter of fact. Do you want to hear it?’ He thrashed his malacca walking stick at a holly bush. ‘This fish – well, he wasn’t a fish, he was a shellfish, a lobster, I think, they change color when you boil them. I know that much. It’s quite easy to get muddled because the smaller ones have other names in different countries, like scampi, crayfish, caramones, but they’re basically all form of sea lice. So one night the lobster goes to a nightclub, an underwater one obviously, probably in a rock pool or something, a disco, so he’s in this underwater disco looking for, I don’t know, a lady lobster, although how they can tell each other apart is a mystery, it must lead to a lot of confusion, but instead he picks up a crab. No wait, he pulls a mussel. That’s it.
May stopped and gave him an old-fashioned look.
‘I’m probably not the best person to write my own memoirs,’ Bryant admitted.”

From Hampstead Heath to seedy clubs, occult bookstores and the sunken home of a rich Russian, the Peculiar Crimes Unit switches to a 24-hour schedule, attempting to solve a series of 4 am murders. All with running commentary from Bryant on the richness and variety that is London.

I miss proper art students with ragged sweaters covered in paint. Look at them, all designer haircuts and hoverboards. They’re supposed to be impoverished and disreputable, not” – he wiggled his fingers about his face- “moisturized.”