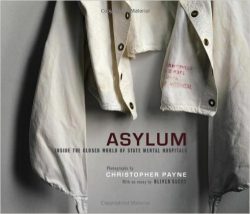 This collection of photos is a true Rorschach test for the reader. The decrepit Victorian-era buildings are both beautiful and sinister. Abandoned rooms show both care and terrifying restriction – gardens, beautify parlors, movie theaters, coffee stands, barred doors and rooms of straightjackets. As one after another of these large state hospitals falls nuder the wrecking ball, Payne has made it his job to document what were once common institutions. Most were closed in the 1970s in what was arguably a poor move for the mentally ill and indigent. What is left gives a glimmer of sadness and but also a stability that many of the mentally ill no longer have. Once housed in asylums like these, virtual cities unto themselves, many of the mentally ill are now isolated in small group homes. Perhaps a return to a community with jobs farming, cooking, or woodworking were a better way to help and support these people. Beautiful, sad and fascinating pictures.