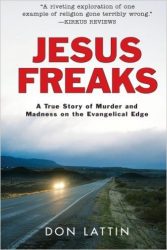 Touching on its early history, leaders of the movement and testimony of ex- and current members, Lattin presents a creepy portrait of the Children of God cult, otherwise known as The Family. The book loosely follows the life of David Berg, the charismatic and manipulative leader, and his chosen disciple, Ricky Rodriguez. Lattin tells the story of the rise of the cult, the death of Berg and Rodriguez’s murder of Sue Kauten in an attempt to find and kill his own abusive mother and save his sister. I’m surprised Hollywood hasn’t made a movie yet – or have they?