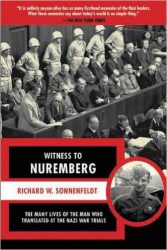 This is by far the most immensely engrossing book I have read in months. Without a pause, Sonnenfeldt leaps into a description of how he, a young army grunt, was pulled from the innards of a jeep he was repairing and whisked off to Nuremberg to become the chief interpreter for the Americans. Sonnenfeldt’s descriptions bounce from interrogating Goring to wistful remembrances of beautiful women in his office to useful advice on going drinking with generals (eat 2 tablespoons of butter beforehand to coat your stomach). His commentary runs to aghast horror and fascination at what the Nazi prisoners have done, along with a strong streak of relief that he avoided the fate of so many of his fellow German Jews.

Sonnenfeldt’s description of his role in Nuremberg ends about a third of a way through the book. He then starts telling his autobiography from childhood. At first I was puzzled by this odd layout. But as he told his story in a chatty, conversational tone, I soon realized why he had chosen to tell his story in this manner. While his part in the Nuremberg trials was unarguably important, it was not the pinnacle of his life in any way. From his early days as the envied doctors’ son, to suddenly be a hated Jew, bouncing the globe as a refugee and coming to land in the United States as a master electrician, Sonnenfeldt’s life had encompassed so many adventures. Some were good, others bad. By the young age of 23, when he took over as chief interrogator, he had already lived a very full life. Afterward, he went on to more adventures and a full and satisfying life – something he admits he would never have done had he not been a German Jew. An exciting roller coaster ride of a story, with more plot twists and turns than a Hollywood blockbuster could ever hope to deliver.