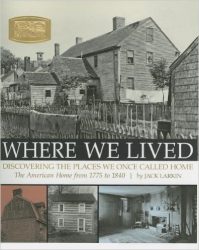 Despite the uninspiring title and cover, Larkin’s book was thoroughly enjoyable. Focusing on homes of the common family from the times of the founding fathers, Larkin uses a wealth of images taken by the HABS (Historic American Buildings Survey), a project created during the Depression for out-of-work architects and photographers. Interspersed with pictures of the often dilapidated buildings are etchings and commentary by visitors to early America. While some found the new American cities charming (Charles Dickens) others loathed most that they came across (Joanna Trollope) and colorfully maligned them. While we still have regional styles, the descriptions and images of the original houses often follow rigid patterns based on region and immigrant nationality. In particular interest to me were the houses of Dutch immigrants from places like Amsterdam, still building their tall, narrow houses – despite the wealth of land around them.