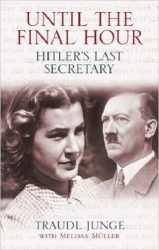 Traudl Junge – Ed. Melissa Muller
Like the accounts written by Hitler’s best friend August “Gustl” Kubizek, Until the Final Hour shows the weirdly human side of Hitler. There is something so very disconcerting about the idea of a madman having friends, normal conversations, afternoon tea and all the other conventional trappings of everyday life. Of course, it stands to reason that despots have to have some charm and personality (faked or not) otherwise they wouldn’t be able to rise as they do. Screaming, foaming madmen rarely control states if those are the only things they do. But still, my mind simply can’t wrap around the image of Hitler crawling around the floor of his office with a poker, trying to get his dog’s bouncy ball out from under the furniture.

Traudl Junge, Hitler’s secretary for three years, recounts her life unraveling as she is pulled from a secretarial pool to become Hitler’s personal secretary. At 22 she dreams of being a dancer but needs to make a living and working for the boss seems like an exciting adventure. From a midnight interview in a bunker in a forest, she follows her boss from the Wolf’s Lair to the Berghof, to visit Mussolini and finally to the Berlin bunker.

Junge’s book is based partly on an account she wrote after the war and partly on interviews she gave in the early 00s. A movie, Blind Spot, is an hour and a half of her recollections. Junge and her fellow secretaries lived in a “golden cage” – in the eye of the storm. While they often had ominous feelings they were so removed from real life, the war and factual news that they knew virtually nothing about what Hitler was up to. To them, he was a tired but kind boss who had a very stressful job. He was paternal and wanted only to talk about light topics when they had tea or dinner:

But that was not the end of the conversation. It looked as if Hitler wanted to say something more, and he seemed to be searching for the right words. Finally, he said, smiling at me and speaking almost awkwardly, that he knew I was still very young, there were so many men here, most of them seldom went home and – well, soldiers feel particularly strongly attracted to the Eternal Feminine – in short, I must be a little careful, not too forthcoming If I had any complaints of anyone pestering me, never mind who it was, I was to come and tell him about it, any time.

Only at the end when Junge ends up in the bunker in Berlin does she come to realize what sort of man she has been working for. Interspersed with her narrative are many comments about her shock, horror, grief and anger at herself for being so blind and complacent. She never asks for forgiveness, just tries to tell how it was as accurately as she can. Riveting.