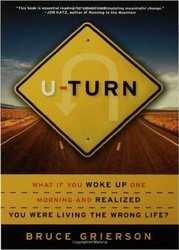 The epically long title of this books reflects the equally massive amount of information in this book. A hair under 300 pages it manages to pack in a dense, and truly fascinating, amount of information. A u-turner is someone who makes a radical change in their life – often swinging 180 degrees to a full polar opposite of their former beliefs. Many of the u-turners switch on strong stances as religion – becoming Christian on a walk, leaving Evangelicalism to become an atheist writer. Some swing wildly on politics – one day an ardent Republican, the next writing screes against Bush and his ilk. Still others take a less precise tack and simply stop being how they were to become almost another person.

Interspersed with numerous true stories, Grierson talks about the trial by fire u-turners go through. Many lose their jobs, many more lose family members, friends and communities that they have been ensconced in. Despite almost certain loss and pain, the u-tuners interviewed talk about a bedrock certainty that they had to change, no matter what the cost. While many contemplate the change silently for a long time, then change suddenly. Others find a commanding voice telling them, literally out of the blue, to make a change.

Who knows who will make a silent, violent shift in their life? While most of us are, and probably always will be “happy carrots” there may come a day one we suddenly find ourselves compelled to become another, alternate version of ourselves.