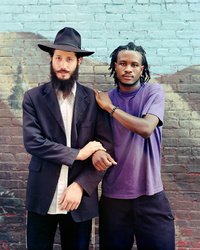 Despite being packed cheek-to-jowel in many  cities, most Westerns have a strong aversion to being touched by strangers. Renaldi’s book captures numerous “couples” touching one another. All are strangers, having met just a moment before.  The facial expressions and body language vary differently in every one.  Some images could easily be of sisters, friends or long-time couples based on the ease with which they lean into each other.  Others are very obviously tense and uncomfortable  – most often two men. Yet, despite their discomfort, these strangers allowed themselves to be photographer and immortalized holding hands or hugging a complete stranger. Odd and deeply compelling.