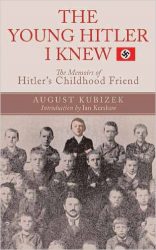 The Young Hitler I Knew is by far the most engrossing book I have ever read about Hitler. Gustl Kubizek was a man in a position no one else had ever been – he was Hitler’s best friend from age 15-19. In all likelihood, he was also the only real friend Hitler ever had. Kubizek chronicles his early years when he and Hitler attended the opera religiously. The two soon became inseparable.

Kubizek states their friendship worked so well because of his own gentle, pliant and wholly apolitical nature, plus his ability to listen patiently to long rants. In all likelihood this is true. Even in his youth, Hitler made wild impassioned speeches, often hours long, and any topic that grabbed him. His “dear friend Gustl” was at Hitler’s side throughout his decision to leave school, attempts to get into the art and architecture schools in Vienna, the death of his beloved mother and his rapid descent into poverty.

Every page brings another bizarre mental image- Hitler in a dirty apron cleaning the kitchen as his mother dies; Hitler watching his one true love, a woman he never once spoke to but dreamed of for 4 years; Hitler drawing and sketching compulsively. Kubizek seems in part awed and a tiny bit amused by his friend and his grandiose ideas and impassioned rants. He recalls watching the inner battle of his friend as he debates whether to join Gustl in the music conservatory cafeteria, where Kubizek could get him cheap food. To sit with Jews (many of which are friends of Kubizek’s) or to pass up the opportunity to eat nut cake.

There are some truly eerie moments in Kubizek’s account. He recalls his friend making a sketch of a new bridge through their hometown Linz, which would replace the wrought-iron Victorian mess currently there. Thirty years later, the bridge was build from plans Hitler still carried in his head. It was shockingly accurate to the sketches Hitler drew up at fifteen.

Recounting his friends misery over money, the loss of both his parents within 2 years and his inability to attend architecture school, I got drawn in and automatically felt sympathy. The poor guy, what a life… But since it is a rags to riches book, I knew he would make it in the end, prevail, and – Holy Hell! – kill everyone who contradicted him!

Kubizek lost track of his friend at 19, and could have ended his book there. The final chapter is probably the most shocking – or at least was to the writer. On a whim, he wrote a letter to his old friend, now Chancellor of the Reich, essentially saying “Howdy hey.” Days later he is ushered through layers of bureaucrats and guards to meet with his old friend. The two talked for hours, Hitler seeming no different than he had as a boy. Kubizek makes a concerted effort not to make any comments about things his friend promised him as a boy, knowing that with a word a great mansion would be built or he would be conducting a famous orchestra. Throughout the war, the retired conductor and small-town bureaucrat, meets with Hitler to talk as old friends. Hitler assures him all the drawings and letters (reprinted in the book) the Kubizek retains are his to do with as he wishes.

At the end of the war, Kubizek is taken into custody by the allies. He is asked why he never took the opportunity to kill Hitler when he was alone with him. “Because he was my friend.”