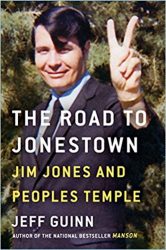 There are some tragedies that are so mind-boggling and so bizarre that we can’t help going back to take yet another look. “Why would anyone choose to follow such an obvious, slimy charlatan like Jim Jones?” we wonder. But the story of Jones and his Peoples Temple, ending in the eventual death of over a thousand people, is not a simple simple one. Author Jeff Guin does an admirable, professional job telling the story of Jones – from childhood to the final, mad days of Jonestown.

The Road to Jonestown is an in-depth and very comprehensive history follows the life of the “Reverend” Jim Jones and his congregation, The Peoples Temple, from Jones’s childhood until the aftermath of the Jonestown massacre. Meticulously researched, Guin documents Jones’s early childhood with his disable veteran father and mother Lyenette(a), a delusion liar convinced that she and her son were meant for far better things. Jones experienced “faith” healing at an early age and quickly picked up the parlance of the traveling, tent-show preachers. Building on his own personal charismatic personality and speaking style (along with a plethora of tricks), he built up his tent show into a small congregation, which grew and grew.

Jones was an incredibly complex individual. In many ways, he was truly devoted to racial equality, social justice, outreach to the poor and a socialist system. His Peoples Temple did, over the years, do a great deal of good for many people. But all this is overshadowed by Jones’s darker side. Always fighting with his better nature was a desire for power, respect, admiration and wealth. He started as humble servant to the poor and, by his delusional end, demanded to be worshiped as a god.

As his desire for power and influence grew, Jones became dependent on drugs, took many mistresses, abused his followers and increased his iron control over every aspect Temple member’s lives.

Author Guin does an admirable job keeping his narrative dispassionate. His offers no opinions on Jones, nor his followers, until his final conclusion. There is no mention of the word “cult,” and very little mention of techniques like brainwashing that the Temple used to keep and control members. Even with the cool, impersonal journalistic descriptions, the madness and chaos that eventually lead Jones to order the deaths/murders of a thousand members of the Temple, along with a Congressman, families of concerned Temple members and journalist in a remote Guyanian jungle is clear.

In his conclusion, Guin calls Jones a demagogue, an excellent description of this mad, enticing man. His inner circle believed implicitly in him, carrying out his orders for fear of being punished themselves. No one told him “no”; all told him he was a god on earth. With every wish pandered to, millions in cash hidden away from the government and a mind filled with drug-induced paranoia, there was no stopping him. Suddenly confronted with the possibility of consequences for his actions, Jones and his Temple decided to go out in one last hurrah. Their deaths were not meant as an escape, but as a way to make one grand, final protest.

The Road to Jonestown  is an excellent overview of the history of Jones and the Temple. It shows the who, how, what and when of Jonestown. Paired with some memoirs and documentaries, you can get a fuller picture of why, though likely no one but survivors will ever be able to truly begin to comprehend Jones and his ghastly legacy.