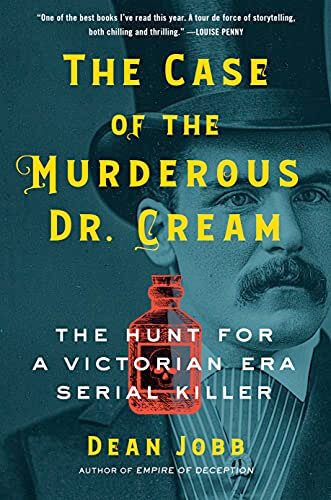 While the name Jack the Ripper still resonates over a century later, Dr. Cream has fallen into obscurity. Yet, in his day, he was as infamous a murderer as Jack. Like his predecessor, Dr. Cream primary targeted prostitutes. However, his crimes were more subtle, as they were done with poison and not a knife. Yet despite being notorious enough to warrant a waxwork in Madame Tussaud’s, Cream was often more lucky than clever.

The author does an excellent job weaving together the tale of Cream’s early life and crimes in the Americas, his later life in England, police and Scotland Yard’s success and failures in capturing Cream. Additionally, Jobb adds comparisons to the fictional detective of the day – Sherlock Holmes. Pulling in Holmes is not a gimmick, but a very real point of contact between Cream, Sir Arthur Conan Doyle (Holmes’ creator) and medical professor Dr. Bell. Conan Doyle based Holmes on Dr. Bell’s amazing ability to size up anyone in seconds. Both he and the notorious doctor studied with Bell, albeit at different times. A fast and interesting  true-crime look at the early days of detecting, medicine and intercontinental policing.