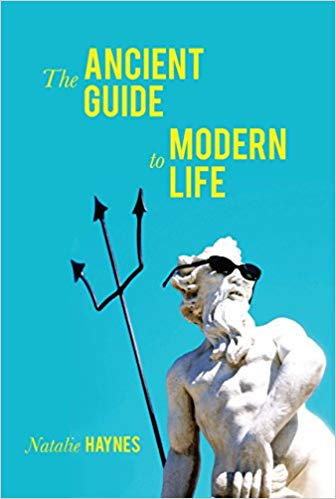 Haynes, a classics scholar who studied at Cambridge, compares and contrasts modern life with those of the Ancients (Greeks, Romans and some Egyptians). While we are often tempted to go with the lazy assumption that “nothing ever changes, people have all been essentially the same”,  Haynes points out some rather stark differences.

Yes, they may have had Democracy, but it looked little like ours. If you were born a male citizen of Athens, you could vote. That was only a fraction of the population; if you were a slave, female, or born elsewhere, no vote.

While most of these civilizations had a polytheistic religion, this wasn’t the major difference from the current monotheisms of today. In ancient times, Gods were treated as mortals+. They had similar temperaments to humans and could be bribed or cajoled into providing assistance. Offerings were treated more as a business transcription than a sacrifice to a god. “I’ll kill two goats if I have a son.” You could easily anger a god, and they had powers. But they also weren’t mysterious and omnipotent.

Much of what we know, of course, was written by “historians” (some of dubious repute) often years of centuries later. They took little notice of unimportant people (women, children, slaves) so much of their society is hidden from us. Tangling out minor comments from plays, trial transcripts and letters is about the best we can do to find out what life was like for these “non-entities.”

The ancient attitude towards life was also vastly different from ours. Slaves were an everyday part of life. The did the dirty work that kept the countries running. Even a smallholder farmer would have a slave or two. Death was often the punishment for what we’d consider far lesser crimes. In fact:

The Romans treated Christ no worse then they treated a huge number of people every day. This isn’t to belittle the suffering they inflicted on one man, but merely gives it a context: crucifying Jesus didn’t make him special, to the Romans. It wasn’t a sign of persecution or unique intolerance. It was, simply, the commonplace treatment of those who were deemed guilty of crimes in the Roman world.

An eye-opening and thoroughly fascinating look at an ancient world we assume we know much more about than we actually do.