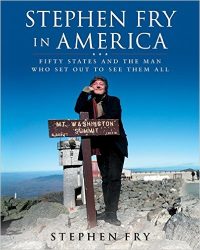 British actor and comedian Stephen Fry (Jeeves of Jeeves and Wooster fame) is that rare breed of European – one who actually likes Americans. In his attempt to show his British audiences that we aren’t all a bunch of loud, vulgar, gun-toting religious nuts he undertakes a project to visit all 50 states…in a black British taxi. Many of his visits are more than just tourist spots. He visits the boarder patrol in Texas, the homeless in Oklahoma and Hmong food stores in Minnesota. He also visits Ted Turner on his bison ranch, the Maharishi University in Iowa, hunts, canoes, eats tons of fried stuff and generally has a grand time…with lots of ridiculous safety gear involved:

How is it that work clothes know when they are being worn by an amateur, a dilettante, an interloper? I wear exactly the same aprons and boots and glove and Charlie and Jesse. They look like fishermen, I look like ten types of gormless arse.

I can’t wait to actually see the show that came of this trip. Bloody funny and so very interesting to see your own country from another’s eyes.