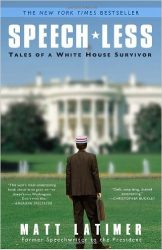 Matt Latimer is one of those fortunates who has a dream, a plan and the ability to reach his goals. Not so fortunately, once he obtained his dream job, he found his dream was not all he had hoped. A political junkie and the only conservative in a family of liberals, Latimer single-mindedly worked his way up he political ladder, starting as a speechwriter for minor politicians. But when his his uber-goal of working as a speech-writer for the POTUS comes true, Latimer was thrown into the fast-disintegrating world of George W. Bush’s regime. The politicians and law-makers were nothing like Latimer had imagined. Their behavior is often bizarre and irrational; they have little knowledge of many of the topics of the day. Finding words to make them sound intelligent is often an extreme challenge. Aids and advisors are often just as confused as the politicians the work for:

In the middle of explaining the economic horrors that awaited us, Keith reached for something near his chair.  It was a Musketeer cap.  As in Mickey Mouse… Without an word of explanation, he placed the cap on his head.  Then he continued talking as if nothing at all strange was happening…As we sat there on the top floor of the White House, at the center of power, I couldn’t help wondering how it had all come to this.