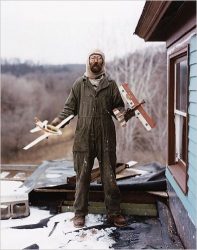 I had seen the cover of this book in a photography magazine and was intrigued by the cover image – a man in a baggy jumper, balaclava and walrus mustache holding two toy airplanes on a junk and snow covered deck. And you know what? I still have no idea who he is or what he is doing  because the book only provides explanations of about half the images. But then again, sometimes that’s half the fun with photography books. Sifting through images of the righteous, downtrodden, dreamers and the deserted you can create your own stories and ideas. Sometimes the truth, such as it is, can be a real let-down.

The book itself is a collection of images loosely held together by their ties to the Mississippi river. As though you are a traveler wandering aimlessly down the river – a later day Mark Twain – the photographer gives an unbiased view of the people and places – snowy convenience stores, convicts on work detail, junk filled marshes, fishermen, homemade shrines and street preachers. What a strange and fascinating country we live in.