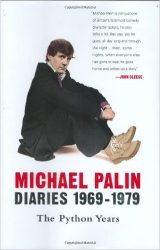 A thick 600+ page book, Palin’s Diaries start slowly but become increasingly engrossing. Covering the very first year Python starts making shows until the release of Life of Brian, Palin describes Python’s ever-increasing popularity. Palin writes with a witty, kind and endearing voice as he describes the vast extremes in his life. One day he is being flown on Concorde to New York to fill a SNL show, the next he detailing one of his children’s birthday parties. Like Kyle MacDonald (One Red Paperclip) he spends a great deal of time considering his life options and weighing what is selling out and what is best for his creative career and family. While Python squabbles continually amongst themselves, Palin presents them as all talented and funny friends, albeit with vastly different goals. Peppered with meetings, meals and events with the other Pythons, good friend George Harrison, Douglas Adams (Hitchhiker’s Guide) and other British notables, you’ll soon be drawn into Palin’s world.