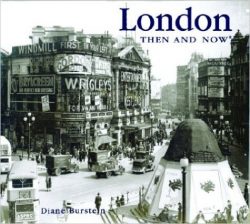 I’m not sure what photos surprised me more in London Then and Now – the photos of landmarks virtually unchanged in over 100 years or those that were completely obliviated with not a hint that they ever existed. In both cases, images of massive stone and brick edifices – Victorian and older – seem timeless in their immensity. It doesn’t seem possible that structures this large could be removed. Yet, as an American, I found it equally surprising that many buildings which would long have succumb to the wreckers ball here are still being used. Filled with images of both notable landmarks and more mundane scenes, any armchair traveler or historian will enjoy this book.