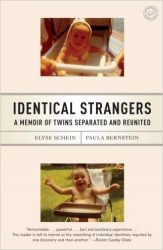 Schein and Bernstein were both aware that they had been adopted at birth. Both had some interest in finding out who their birth parents were. Finally both found and contacted the adoption agency where their adoptions took place. Instead of finding their birth parents, the two were shocked to discover that they had an identical twin… and they had been separated for research. While their discovery and consequent research and interviews with living staff who decided to separate a number of twins is often infuriating and almost sickening, most of the book is uplifting. Once the shock of meeting an identical twin wears off, Schein and Bernstein candidly discuss their secret fears and worries and also their joy at finding their other half.