“The villain is the person who knows the most but cares the least.” – C. Klosterman 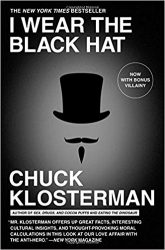 Klosterman, Gen-X’s pop-culture philosopher-in-chief, turns his gaze to the concept of villainy. In his own slightly hyperactive way, Klosterman skips from Machiavelli to Kareem Abdul-Jabbar, O.J. Simpson to Snidley Whiplash and Judas to Joe Paterno.  ‘What’s scarier – a villain with a motive, or a villain without one?” he asks. Using his own standard, “the villain is the person who knows the most but cares the least”, Klosterman looks at our perceptions of villainy and what truly makes someone a villain. There are the tricks of the mind where the public becomes enamored with confidence men and tricksters, making them folk heroes instead of despised. Yet others become “villains” simply because they won’t play the game, such as Kareem Abdul-Jabbar refusing to fawn and play nice with the press. Each essay is intriguing and engaging, though the obligatory Hitler essay (which he felt compelled to add), does feel forced.