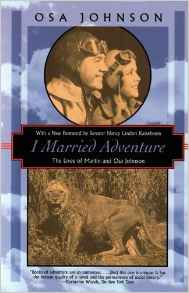 Osa and Martin Johnson were once household names. In the 1920s and 30s they brought the wilds of Africa, Micronesia and Borneo to the big screen in little towns. Both were originally from small towns in Kansas. While Martin dreamed of seeing the world and photographing it, Osa wanted only a nice home and family. In her late teens, she met and spontaneously married Martin and her life veered wildly off track. They spent the first few years together running a traveling show and lecture about Martin’s adventures in the South Pacific, working as a deckhand for writer Jack London. Martin, however, dreamed of having more adventures. He saved the cash up and took Osa on an adventure to the wilds of Borneo to photograph headhunters and cannibals. Osa gives thrilling accounts of running through jungle, canoeing in dugouts, hunting in the savannas of Africa, disease, lions, hardship and adventure, all from a small-town girl’s view. The films now seem cliched and trite in some ways, but the images they managed to gather with the most basic and lumbering equipment really is to be admired. Romantic and exciting.

As a side note, we took a roadtrip to visit the Osa and Martin Johnson Museum in Chanute KA.  It was surprisingly well done and well-worth a side-trip if you are in the area.