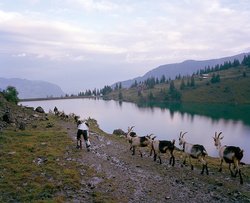 Who hasn’t looked at their pet and thought “Damn pal, you have it good. Food, toys, naps and not a care in the world.” Inspired by similar ruminations while dog-sitting Noggin the dog, eater of horrid things, Thwaites decided to write an arts grant application to give being an animal a whirl. Much to his shock, he received funding. Thrown in the reality of how difficult it is to truly become animal-like, rather than simply anthropomorphizing them, his project careens from one hilarious attempt to make parts of himself more goat-like. From a visit to a shaman, a goat rescue, prosethetic makers and some very baffled Swiss goat herders, Thwaites careens from one baffled and bemused professional to another. While his project may have not brought him the care- and stress-free existance he imagined being a goat would bring, he does examine many parts of “being animal” that we don’t often consider. A funny, fast and surprisingly educational read.

Note 9/23/16: Thwaites just won an Ig Noble Prize in Biology for his book