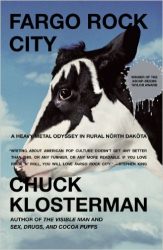 Chuck Klosterman
Klosterman was an excellent recommendation from Mike H. Both titles are semi-autobiographical books about Klosterman’s love of rock and roll/metal, his job as a writer with Spin, his childhood in North Dakota and various and sundry famous and infamous bands. Fargo Rock City is, if anything, a manifesto of heavy metal. Essentially Klosterman says “Yes, metal may be loud and obnoxious, violent and often stupid and is often written off as a wholly pointless a genre. But metal does matter simply because it means a lot to some people.” This is a point that can as easily apply to metal as it can to collecting Hummel figurines, Elvis or Baroque instruments. It matters because some people care very deeply about it. Klosterman also makes the most brilliant response to the various “decency groups” that have cropped up throughout the years. They say “Metal (or rock or rap or whatever) is sexist, violent, stupid, misogynist, etc.” To which Klosterman replies “Well yeah, duh.” Irrefutable logic.

Killing Yourself to Live is an account of a cross-country trip Klosterman took to write a story for Spin on famous places where members of rock bands died. While the premise may sound a bit weak, I found his ramblings on the bands, his life and the locations thoroughly entertaining.

I think what I like most about Klosterman’s voice is how familiar he is. His narratives remind me of brunch after a reunion or party. Everyone stares around the Denny’s in dull exhaustion, except for one person. Delighted to have found a captive audience and often still drunk from the night before, they launch into a monologue on their favorite subject. They lecture, muse, make jokes about and spew reams on their pet topic. The rest of us sit in bemusement, sip our coffee and let them rip. Maybe the topic isn’t dear to our hearts, but it is just so fun to sit back and watch the stream of conscious flow by. Good stuff.