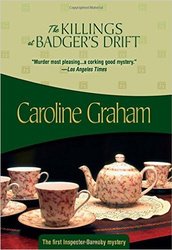 For some inexplicable reason, the Barnaby series covers could double for vapid romance novels from the 50s. However, the books are very recent and have very modern plots. While their is some continuity in the series, they can be read out of order. Two particular favorites are Written in Blood and Death in Disguise.

A good mystery will have lots of twist and turns with no clear end in site. A really good mystery will have well-written characters fully fleshed out and endearing to the reader. A great mystery will also be populated with some really nasty rat-bastards who are clearly fast closing in on a well-deserved comeuppance. Written in Blood fully deserves the category of great mystery. Death in Disguise derives its charm not from revenge but from the cast of flakey characters.

After the guru of a new-age co-op is murdered, Barnaby and his staff must question a houseful of loopy alternative reality practitioners, each with their own astral plane and theory of what really happened.