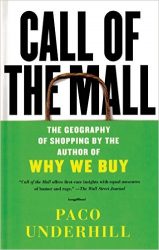 What is wrong with the mall? Well, everything, according to consumer behavior specialist Underhill. And, he adds, the rise and fall of the mall has been almost entirely avoidable. Going through a standard mall visit, Underhill points out the numerous ways malls fail to satisfy the consumer. From the architecturally blank outer walls, lack of coat and package check, unreadable maps, terrible merchandise displays and bathrooms hidden down murky hallways, the average mall is designed almost on purpose to irritate the consumer. Why aren’t clothes shown on angled racks so you can see everything? Why isn’t there anything to eat that isn’t fast food, despite high-end stores being mere feet from the food court? How much business do those little carts do (20% of a mall’s revenue, turns out). A very interesting and enlightening read on why malls are so miserable and why so many are failing.