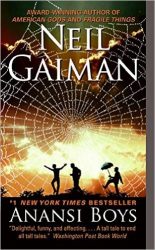 I am shocked and apologetic that I forgot to review this last month. Perhaps I forgot because I read it at the very beginning of the month – or perhaps my mind was going “wub wub wub” from having seen Gaiman/McKeen’s movie MirrorMask. SEE IT IF YOU CAN! Regardless…

I should state for the record that Gaiman’s American Gods is one of the 10 best books I have read. Rich and dense and intense and wonderful. Just right in every way. Anansi Boys is set in the same universe, though the only character from American Gods to appear is Mr. Nancy (the spider god) whose death starts the series of events covered in the books. As I started the book, I found myself feeling vaguely disappointed, though I was enjoying the plot immensely. When I thought about it, I realized that I had been expecting another American Gods. However, the size of the book should have tipped me off before I even started.

Unlike AG, there are no side stories or layers of mythology to plump up the book. Instead, the plot revolves tightly around Fat Charlie, Mr. Nancy’s son. Like other characters in Gaiman’s world (Neverwhere), he wants nothing more than a normal life with no surprises. His early life is marred by humiliation at the hands of his crazy, lying, teasing father. Yet, as Charlie tries to cling to his normal life (as far removed from his father’s as possible), the fantastic other keeps intruding, dragging him into unreal and dangerous territory. And in the end, once normalcy is won, it doesn’t seem to be such a glittering prize after all. Even if you are not a fantasy fan, I think you will enjoy this book simply for the lovely picture of the everyday world being broken apart when the unthinkable settles into your guest room and brings his own waterfall.