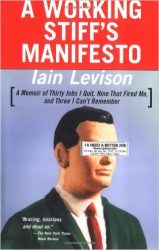 Less lighthearted than halliday’s book is A Working Stiff’s Manifesto. While there are definitely some priceless moments (the ceramic donkey), I was more than a bit disturbed by this book. Levison first joined the military to get training in electrical engineering. While he did receive training it what may be considered a vocation, he soon realized that what he learned was highly specialized and almost useless in the real world. He then attended college, earning an English degree. Once again, he felt that he was lied and cheated to about the usefulness of the degree. At this point in the book, I kept hearing the lines from the musical Avenue Q:

What do you do, with a BA in English?
What is my life going to be?
Four years of college and plenty of knowledge
Have earned me this useless degree

In Levison’s case, the degree is not only useless, it is a detriment. One employer after another wants nothing to do with Levison and his degree, assuming that he will want more money and be stuck up. He instead bounces from one horrendous, low-paying job to another, often lying about his skills to get hired for princely minimum wage jobs. All in all, he estimates having at least 40 jobs after college. After a short foray working as an assistant to a friend who is a long-distance trucker, Levison decides to take the big money plunge and go to Alaska to work on a slime line gutting fish. While large sums can be earned working on the rusty hulks, leaving before your contract can leave you stranded without pay or a ticket home. Conditions are miserable and the other workers often violent and dangerous.

If anything, I found this book a sad, though fascinating, cautionary tale for the modern worker. While Levison does, for the most part, portray himself as a guy with poor decision making skills but a hard worked who just can’t seem to get a break, I do have the sneaking suspicion that some of his misery is brought on himself. He does mention once, late in the book, that he does often have to squelch feelings of superiority because of his degree. He also mentions that he put himself through college as an EMT, something which he never returns to. Regardless, a much more thought-provoking book than I had expected, though I doubt the author had intended it as such. Perhaps the most disturbing comment in the book – in his blurb at the back he is listed as currently unemployed.