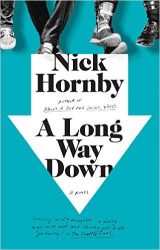 A Long Way Down reminds me of Douglas Coupland’s writing, the story is wry, funny and depressingly accurate. The plot follows four mismatched people who meet on a rooftop, New Years, to commit suicide. The middle-aged mother with a son in a vegetative state, the former morning -show TV host (fresh out of jail), the very messed up and angst ridden teenager and the former musician with a bad case of CCR. Stunned to find so many other folks with the same idea, they put off their run at death for awhile. The strange group forms a friendship of sorts, bound by their experience. The disparate group fights, argues, tries to help one-another, picks on one another and fights some more. When all is said and done, the book ends up on a slightly up note, of sorts. A great read with some bizarre twists and turns and fascinating, though not necessarily likeable, characters.