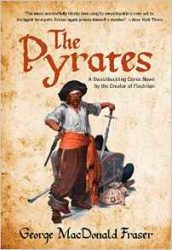 “Such a day, rum all out – our company somewhat sober, a damnedd confusion amongst us! Rogues a plotting – great talk of separation. So I looked sharp for a prize – such a day took one, with a great deal of liquor on board; so kept the company hot, damnedd hot, then all things went well again” – Blackbeard (Edward Teach)

First published in 1724, this book was an instant smash hit. Numerous editions followed, jam packed with lurid tales of murder, robbery, riches beyond measure and barbarism.

Virtually any pirate story you have read or seen has details gleaned from this book. The dead man’s chest, pirate brotherhood and code of conduct, Blackbeard, Mistress Anne Bonney, pirates and captains being buried at sea in their fine red overcoats and diamond jewelry are all here. The really amazing bit, though, is that these stories appear to be true.

At its publication, and for centuries after, readers assumed they were the works of overheated imagination. However, through careful searches of records, historians have found the credible evidence in newspaper, letters and court documents to verify most of the stories in this book.

The only real mystery left, is who “Captain Charles Johnson” was. No records of the time indicate a captain of the name. Various theories pin the writing on authors and playwrights of the time – including Daniel Defoe – though this theory has been disproven.

The writing style itself is oddly uneven. The bulk of the text is a unemotional account of the deeds of the pirates, recounted in a legalistic manner – backed by numerous quotes from court records and newspaper accounts of the trials. However, it is clear that the author is no stranger to the sea. Occasional comments like pirates who had been pardoned by the king soon returning to their old ways like “dogs returning to vomit” add a certain colorfulness to the narratives. Occasionally, the author will break of mid-description to give a short history of an Island or coast that the pirates inhabited. These 2-3 page commentaries give a description of the vegetation, peoples, animals and weather equal to any 8th grade geography report. The language is a bit rough going in places, but read an account or two of your favorite villains just for fun.