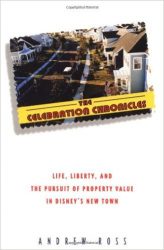 We Americans like describing ourselves as pragmatic realists – capitalists who make cold, shrewd decisions based on the market and the value of a dollar stretched as thin as possible. However, conjure up visions of white picket fences, front porches, little Susie on her bike and mom making apple pie and all but the most hard-core of us will turn squishy at the knees. And there is no company on the earth to inject dreams and desires into the average Joe than the magical company of Disney. And boy do they know it. The Disney-backed planned town of Celebration has become a microcosm study of American ideals created in a made-to-order community. In the mid-90s, Disney announced with great fanfare that they would be creating a Utopic planned community on Disney property. It would have state-of-the-art schools, a perfect downtown, sidewalks and parks to reduce driving and beautiful planned architecture based on Victorian, Mediterranean and other classic styles. It would, in short, rock. Lots were snapped up for 30% above market value within no time. And then the fun began. Andrew Ross, a journalist for The Village Voice and The Nation, moved into Celebration for a year to chronicle the journey of the town. While much had been written about the town, most of it had been either wildly negative in an Orwellian vein, or glowing with pixie dust and hope.

There is something about the phrase “Utopia” that makes my skin crawl. Ross describes this perfectly in his introduction, as he describes the literature for Celebration:

Few of the people standing in line had seen anything like a detailed rendering of a house, let along a floor plan. They had been drawn there by gilded rumor and a boffo adverting campaign that often read like scenes from a Ray Bradbury story stripped of all the stuff that makes your scalp stiffen.

Off and running on this happy note, Ross covers the highs and lows of his visit and subsequent interviews with numerous visits – the few successes and the numerous failures in the school, town rules, government and miserable building conditions. Along the way he covers a good chunk of Utopian urban planning and its history (Why, no Mr. Wright, I don’t think people will be fine in houses without closets). A most interesting point he makes is that perhaps the idealized utopian community – based on a vision of the 1950s a la Norman Rockwell will never truly succeed because half the population were in a sense slaves in/to their own homes – and have no desire to return to this imagined wonderland. A short riff on feminism and Stepford Wives made for a great aside. He also makes forays into the history of Florida itself, zoning regulations (Disney has the rights to build their own nuclear power reactor, should they want to. No, really) and the effect of Disney on the neighboring communities. I commend Ross for his evenhanded descriptions of Utopia, though somehow I doubt the current residents, fixated on appearance and property value, will appreciate his clear-headed candor. Ah well, maybe someday they will wipe the pixie dust from their eyes and try living in a real town.