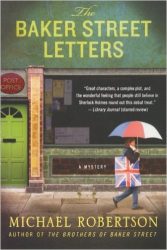 The premise of The Baker Street Letters is probably the best part of the book. Lawyer Reggie Heath rents the offices at 221B Baker Street. As part of his contract, all letters sent care of Sherlock Holmes are to be answered by a member of his staff. A letter sent by a little girl 20 years previously sparks a murder, Heath’s brother goes missing and he must leave his comfortable little world to head into the underbelly of L.A. A moderately good read with a rather weak ending. Still, the premise does hold through most of the book.