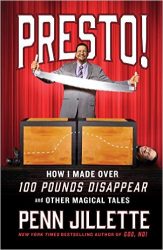 Yes, that Penn, of Penn and Teller. One has a first name, one has a last and together they’re magical. *ba-doom-ching*

Jillette, a man prolific in many things – writing, magic, acting, opinions – was also quite prolific in the weight area. After a nasty health scare, he decided to lose weight. Being a showman and a fan of the extreme, he allowed himself to become a guinea pig for friend Ray Cronise.

“CrayRay’s” “nothing but potatoes for two weeks” diet, followed by infinite veggies and not much else did the trick. Penn lost 100 pounds in a matter of months.

Penn’s story would be interesting enough on its own, but he is the sort of master storyteller that veers from topic to fascinating topic, making it all work in the end.  Wweight-loss is the main theme. His family and life in Vegas, magic shows, friends, atheism and other topics dear to him, add rich side-stories (and some excellent name-dropping).

Be warned, for those with delicate shell-like ears (or eyes….not that that makes sense), one of Jillette’s friends describes his emails as “haikus written by someone with Tourettes.” While some of his swearing seems a bit gratuitous (as though he realized that the last few paragraphs had been devoid of any cursing and he was out of practice), some seem particularly apt. Jillette’s description of Donald Trump’s hair as “cotton candy made of piss” is a phrase of sheer comedic genius. Pull up a warm potato and enjoy.