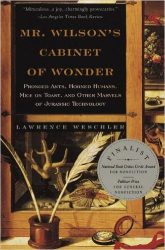 Mr. Wilson’s Cabinet of Wonder is a strange little book on a real-life “museum” – the Museum of Jurassic Technology. Stuffed with wonders such as the Sonnabend Model of Obliscence, laying out reality in a cone format, information on various and sundry strange animals, a scale creation of The Ark, and a recreation of the Platonic conception of memory, symbolized as a set of hands holding a bird. Clear as mud, right? Visitors to the museum will be greeted by colorful dioramas, pamphlets and other literature and even narrated displays. What many will not catch is that most of the museum is pure confabulation. Displays are made up, descriptions and text borrowed from other museums and displays created by the owner, Mr. Wilson. Taking the concept of an unreal museum a step further, Wilson actually creates and publishes books, which he then bases his displays on. Often funded as a performance art piece by befuddled grants groups, Wilson not only runs his museum but often lectures on his gibberish theories. Packed with big words, assurances that the audience is well-versed in the theories already, and backed by his books and museum, Wilson has bamboozled audiences of scientists around the country. Great fun, really bizarre I really hope Pete gets around to visiting. Heheheehe.