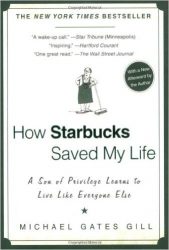 Michael Gates Gill is a man who would make a prime case study for U-Turn, Green with Envy and House Lust. Gill, the son of a wealthy “New Yorker” writer, grew up with anything and everything he could want. His family lived in a brownstone in Manhattan. His ivy league school and connections delivered a job to him on a silver platter. He gave his life to his company, working insane hours and moving his family repeatedly. And then, suddenly, Gill was too old and out the door. His own start-up business foundered, he had little savings, a huge house and an affair that ended his marriage. Finally, at the end, found himself sitting in a Starbucks with nowhere to go, nothing to do and no money.

So, Gill became a trainee at Starbucks. This, Gill claims, saved his life and made him happier than he has been in his whole life. I do believe that Gill is truly sincere and I do think the job was a lifeline for him. He certainly became a u-turner in attitude and lifestyle. However, there are moments of wistfulness where I could tell he might consider trading it all back for his old life. Maybe… Gill truly did live a charmed life and his stories and flashbacks to meeting Hemmingway, rubbing elbows with famous writers and knocking the queen of England’s elbow at tea do have a certain “I was somebody, really, truly, see?” ring to them. But then again, I doubt Gill’s story would be nearly as compelling if he had merely been an average middle-manager who ended up as a barrista. A very satisfying, uplifting and good read.