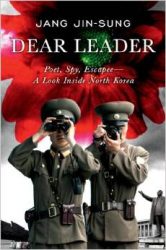 Jin-sung’s story of escape from North Korea is as heart-stopping as any spy thriller. Unlike a thriller, this is a true story.  Raised in a family with high levels of access to benefits and income, Jin-sung is well-educated and thoroughly indoctrinated. He is perfect fit for to join the inner circle of Dictator Kim Jong-il. However, as Jin-sung is given more access to party history and a job writing propaganda and epic poets to their “dear leader”, he becomes increasingly disillusioned. When a top-secret document goes missing, Jin-sung and his best friend bolt for the border to China. The ensuing months spent wandering through the bitter Chinese winter, penniless and being tracked by both North Korean police and Chinese forces, is grim and miserable. The only bright spots are a find kind people that take pity on them and help.  The book is a harrowing reminder that while it may read like a story of Nazi death camps in World War II, the misery and starvation is happening now and is currently being inflicted on an entire nation.  Thousands, if not, millions of North Koreans are starving to death thanks to their regime. The truly ghastly realization is though Jin-sung escapes and can write freely, he had many advantages that the average North Korean citizen would not. He had lived with enough food before he left, was healthy, had some cash, kept his high-level papers and had enough knowledge to bluff his way through some tricky situations.  A definite must read – gripping with amazing insight into the background of the North Korean government, its propaganda machine and its starving populace.