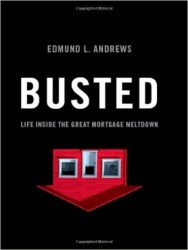 New York Times financial reporter Edmund Andrews covers the sad and confusing story of an average American who was taken in by the mortgage industry and s in danger of losing his home – himself. Despite his close and continual study of the American Economy, Andrews found himself drawn into the shady world of ARM loans, flubbed financial forms and an overpriced “dream” house. Newly married with children and step-children, Andrews dreamed of providing his new family a lovely home. However, the real estate boom was at its maddest. Partnered with a wily and unscrupulous realtor, Andrews signs up for a mortgage that bore no relation to his income. Not surprisingly, rates change, his wife’s employment situation changes and bills come flooding in. In a moment of frustration, Andrews confesses his sins to the Great Man himself, Allan Greenspan, during an interview. Greenspan is horrified. Apparently, he had never actually met anyone losing their house to the mortgage scandal. A realistic, clear-headed and sadly common story of how even the smartest and savviest can be taken in.