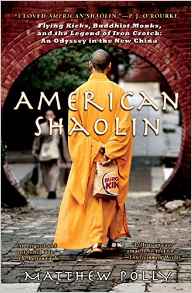 Chinese kung-fu is one of the most glorious examples of obsessive-compulsive behavior in the history of human culture.

There is a certain type of person who needs something to hang onto, make their own and Focus On (yes, with caps). For some reason, martial arts (and religion) seem to draw these folks to them. Polly is a kind of uber-obsessive in that he actually moved to China to study kung-fu at the Shoalin temple. Like anything portrayed in Hollywood movies it is both completely different and yet exactly as portrayed. Polly’s outsider exuberance and overwhelming desire to fit in is at times rather sad and pathetic. Yet I can’t help admire him for giving his all and truly immersing himself in his quest for knowledge. He makes no excuses for his reasons for his trip, few of which have to do with any sort of spiritual enlightenment and more to do with getting girls. But there is a charm in his openness and his adventure. The pictures are an *ahem* extra bonus.

Historians of martial arts explain the creation of all these styles either for either self-defense… or religious reasons… but that doesn’t explain the complexity. It took me all of a week to come up with my own theory: boredom. Put a bunch of sexually repressed young men on a mountaintop with nothing to do…and… a myriad of Shaolin styles is the result.